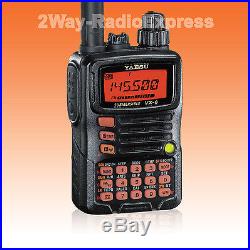 This listing is for the VX-6E. The VX-6E and VX-6R are exactly the same radios. The only difference is the initial frequency coverage done at the factory. We completely unblock this and the radios remain the same otherwise. This is a Special Software Upgraded and unblocked VX-6E for 10 Watts Output. 10 Watts are only available in the VHF band (UHF remains 5 Watts)and only when radio is connected to an external 12 volt source via the DC jack. Output remains 5 Watts when used with the battery. FULLY UNBLOCKED TRANSMIT RANGE! INCLUDING 6 meter and 220 MHz Bands! 50-54 MHZ CONTINUOUS (About 1.5 watts out). 136-174 MHZ CONTINUOUS (About 5 watts out). 220-225 MHZ CONTINUOUS (About 1.5 watts out). 400-470 MHZ CONTINUOUS (About 5 watts out). RECEIVES 0.5-999 MHZ CONTINUOUS. CHARGER WORKS FROM 100 to 240 VOLTS for Worldwide use. The VX-6E is an ultra-rugged 144-430 MHz FM Hand-Held featuring wide receiver coverage, JIS7 submersibility, the Yaesu-exclusive Emergency Automatic Identification (EAI) system, and ultra-simple keyboard access to important features. New on the VX-6E is the One-Touch Direct Memory Recall feature, that allows you to recall ten favorite memories with a single button press, just like on your car stereo. The VX-6E comes equipped with three powerful emergency features: EAI Feature: Ideal for Outdoor Operation! The EAI feature lets you and your support team configure your radios so that, in the event of a climbing or hiking accident that leaves one of you incapacitated, someone else can command your VX-6R/E to transmit without you pressing the PTT, allowing the others to use your signal to perform direction finding and effect a rescue. Emergency Feature: An “Emergency” function is also provided that will transmit your Callsign on the UHF Home Channel, while simultaneously flashing the CW ID in bright white light on the transceiver’s LED and beeping the CW ID loudly from the speaker. Ultra-Bright Emergency Flashing LED: In an emergency, the transceivers LED may be engaged continuously in its “Bright White” mode, instead of the usual red or green color, and may be used as a signal lamp or flashlight. The VX-6R/E is rated to JIS7 specifications for submersion (up to 30 minutes at a depth of up to three feet), and because the microphone jack is sealed against water ingress, you can even use the CMP460 Speaker-Microphone while maintaining the submersibility of the VX-6R/E! 144/430 MHz: 10-5 Watts of Power. The supplied FNB-80LI (7.4 V/1400 mAh) provides up to 5 Watts of power output on both the 144 and 430 MHz bands. This high battery capacity provides a typical operating time of 7 hours, depending on operating conditions. In addition to full operation on the 144 and 430 MHz Amateur bands, the VX-6R/E provides a wide range of monitoring excitement, thanks to its receiver s incredible frequency coverage of 504 kHz to 998.99 MHz. We recommend the use of an external antenna for best performance on particular bands of interest, such as Shortwave. The Most Memories Ever Each of the 900 available memory channels may be assigned an alpha-numeric “Tag” (label), for quick identification of the channel. The 24 memory banks may store up to 100 channels each, and a channel may be assigned into multiple banks, if desired. And you can assign an identification tag. To each memory bank. The optional SU-1 Barometric Pressure Sensor unit permits monitoring of sudden weather changes by monitoring atmospheric pressure. Although not designed for precise pressure measurements, it can be a valuable tool for alerting you to possibly dangerous changes in weather conditions. Get your own map of past buyers. The item “Yaesu VX-6E 10 WATT VERSION, UNBLOCKED TX, Including 6m and 220 MHz! VX-6R” is in sale since Tuesday, March 17, 2015. This item is in the category “Consumer Electronics\Radio Communication\Ham, Amateur Radio\Ham Radio Transceivers”. The seller is “2way-radioexpress” and is located in Athens. This item can be shipped worldwide.